Deputy Prime Minister Mr. Petrovic presented the situation of Kosovo before Members of the European Parliament 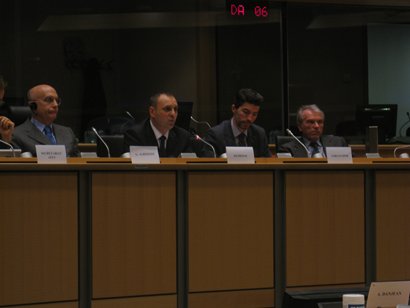 In the course of meetings in Brussels, Deputy Prime Minister has made a presentation to the European Parliament, which was attended by a large number of members of Parliament  that constitute the Committee for Foreign Policy, officials of Diplomatic Missions accredited in Belgium.

In this case, Mr. Petrovic is congratulated by members of Parliament as Doris Pack, Ulrike Czech Luna for his work, etc.
In this presentation the Minister Petrovic is focused on the progress achieved in Kosovo, especially in the overall social and institutional integration. In this regard, he has underlined that the decentralization process has been adequate form that has given its own results.

In addition Minister Petrovic has talked about the current challenges dealing with the situation that is created after the barricades, in the north. They are unacceptable and harmful for the community living in this area.  The Ibar River should be unity and not division, has emphasized in his presentation.

The role of the international community should increase as well as their commitment in order that to make parties to find lasting solutions and to help in establishing law and order in north Kosovo.

In this presentation, the Minister Petrovic responded to questions of European parliamentarians which had to do with the overall developments as social, economic, political and democratic in Kosovo.