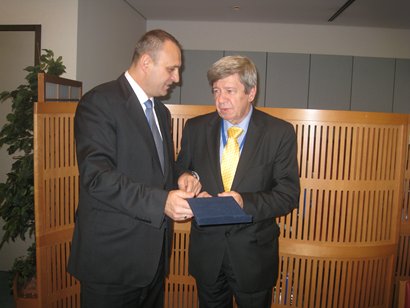 Deputy Prime Minister of Kosovo, as well as Minister of Local Government Administration, Mr. Slobodan Petrovic is staying in an official visit in Brussels.

During his visit to Brussels, Deputy Prime Minister Petrovic has made important meetings, on purpose of full informing about the work of the Government of Kosovo, in completion of European standards in economic development, rule of law and good governance.

At the first meeting with representatives of the European Parliament of ALDE Group ( League of Liberals and Democrats for Europe), Deputy Prime Minister Petrovic has presented in full form general developments in Kosovo, with  special emphasis on the lack of freedom of movement in the north of Kosovo and process of technical dialogue with the Republic of Serbia.

He has underlined that it is very important that the situation in north be normalized and that the first step is the removal of barricades and the possibility of free movement of people and goods. In this regard, he has encouraged a more active role of the EULEX structures, to assist in this process. The interest of members of the European Parliament has been high, by making a range of questions related to the overall development not only in Kosovo but also the wider region.

Deputy Prime Minister, Petrovic has had a working lunch with the Head of the Delegation for relations with Albania, Bosnia and Herzegovina, Serbia and Kosovo, Mr. Eduard Kukan accompanied by other members of Parliament.