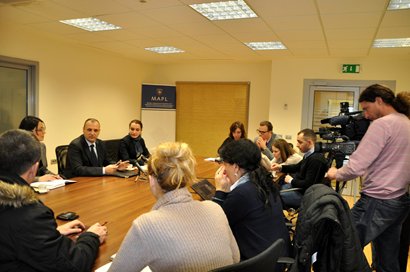 International Civilian Office in Pristina (ICO) organized a visit in Kosova, for the journalists of the medial houses of Serbia.  Representatives of media have met today with Deputy Prime Minister and Minister for Local Government Administration Slobodan Petrovic. Deputy Prime Minister during his conversation with journalists stressed the success that Ministry of Local Government Administration has achieved in the decentralization process and that the success in the last report of the European Commission is evaluated with the highest grade.

“The process of decentralization is the best process that has been achieved so far in Kosovo and within this process are established four new municipalities (Gracanica, Partes, Klokot and Ranilug) and that these municipalities after two years of establishment have shown that they work in the interest of all those who live in these municipalities, "said Deputy Prime Minister.

Talking about the problems and current situation in the North of Kosova, and dialogue between Prishtina and Belgrade, minister Petrovic said:

“In the North of Kosovo, everything is necessary to be done in order to avoid eventual conflicts and to set free movement of people and goods. Also, it is necessary to start the implementation of the existing agreement between Belgrade and Pristina in order to improve lives of our citizens”, emphasized Minister Petrovic.

Representatives of the media from Serbia have continued their visit in Kosova and were stopped in the municipality of Gracanica, where they were welcomed by Mayor of this Municipality, Bojan Stojanovic. Journalists have met yesterday with Prime Minister of Kosovo, Hashim Thaci, head of the ICO, Peter Feith, and with the commander of KFOR, Erhardom Drevsom.