MLGA has presented the strategy on Local Self-Government 2012-2015 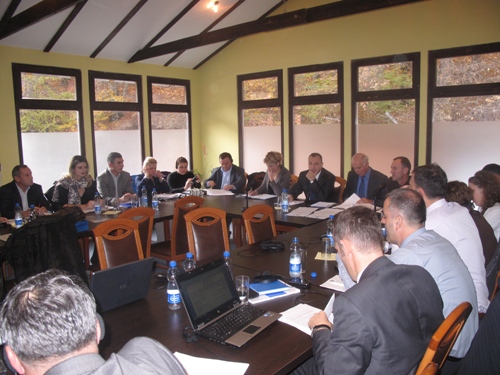 “This strategy is very important for the Ministry of Local Government Administration and to implement fully, is necessary the participation of all of you"- said Deputy Prime Minister Petrovic.

Minister Petrovic reiterated that the sucess is achieved with the process of decentralization and thanks to MLGA, and this is demonstrated in the recent report of European Commission.

In the workshop where was presented the strategy for Local Government 2012-1015 except Minister of Local Government Administration and Deputy Minister of MLGA, Mr. Basri Musmurati, also were present members of the cabinet of minister and  Directors of Departments of MLGA.

Local Government Strategy 2012-2015 is a basic document of Ministry of Local Government Administration, which aims to coordinate and systematize all the activities taking place in the field of local self-government in Kosovo, in order to fulfill the mission and legal mandate of MLGA.
The strategy is elaborated in cooperation and will be realized in coordination with municipalities of Kosovo, the Association of Kosovo Municipalities, line Ministries and with other local and international actors working in the realm of local self-government in Kosovo.